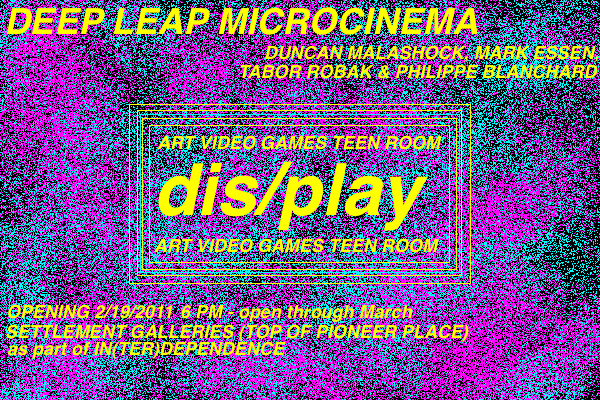 Ugh! Mom! Get out of here! Stop walking through my room! Being at the mall. Living at the mall. Art video games. Art Bart. Art gallery. Teen room. Ugh! No one understands!

////
Springfield Eternal is a Saturday morning memento mori. An appropriated Bart Simpson is subjected to a Sisyphean eternal punishment as he ages, withers and dies over and over again, steadfastly staying on his skateboard or staying true to character. Questioning how time is represented in cartoons, this short looping animation uses morphing techniques to create subtle animation effects in an attempt to blur the time of the narrative and the time of the viewer.

Flywrench is a tough game about avoiding colored lines. You move around by flapping and rolling. Each maneuver your ship can perform changes its color. Match a line?s color to pass through it. Try not to overthink things. (Playable from 2/19 – 3/4)

Pretend to Be Sick; Pile with Pedestal; & It's Always Time to Chill Forever are a part of Duncan Malashock?s expanded practice. His work is frequently slow, abstract and colorful. (Playable 3/5-3/18)

Mansion is a virtual environment designed in 2010, it was first exhibited as part of Jstchillin's ongoing series of digital art. (Playable 3/19-3/31)

/////
Philippe Blanchard's practice reflects upon the history of the moving image—early as well as recent—through the use of animation, video, visual effects and new media installations. Key to his recent practice has been the notion of 'expanded animation': practices that explore our spatial and temporal relationship to the moving image by integrating the animated image with installation or live performance. Philippe is based in Toronto, Canada, is a recent graduate of the Ontario College of Art & Design's interdisciplinary MFA program and also teaches at OCAD. His animation works have been screened across North America and Europe.

Mark Essen is a game designer, he lives in Los Angeles and is currently a graduate student in UCLA's Design and Media Arts program. His work has been exhibited at FILE in Sao Paolo, the New Museum in New York, MoCCA in Toronto, FACT, [DAM] Berlin, Vice/Intel's International Creators Project, and various other galleries, festivals, and basements.

/////
The IN(ter)DEPENDENCE exhibition points to the emergence, in and around Portland over the last 5 years, of small, independently operated, and self-funded cultural hubs. These creative centers have sprung from garages, sheds, old store fronts, unusual gallery situations, above creeks, and within vacant retail spaces. The cross section of these centers represented in IN(ter)DEPENDENCE have introduced exciting new levels of refinement, fresh inspiration, and consistency into the familiar DIY sensibility the Northwest is known for.

The Settlement is a collection of four artist run galleries on the top floor of Pioneer Place Mall in downtown Portland. Each gallery (People, Place, Store, and Trade) maintains a unique curatorial identity, working together to provide a view into the contemporary, cultural landscape of Portland and the Northwest region. The four former storefronts, comprise 10,000 square feet of space. Settlement programing includes exhibitions, performance, and a wide range of literary, musical, and creatively oriented community engagements.