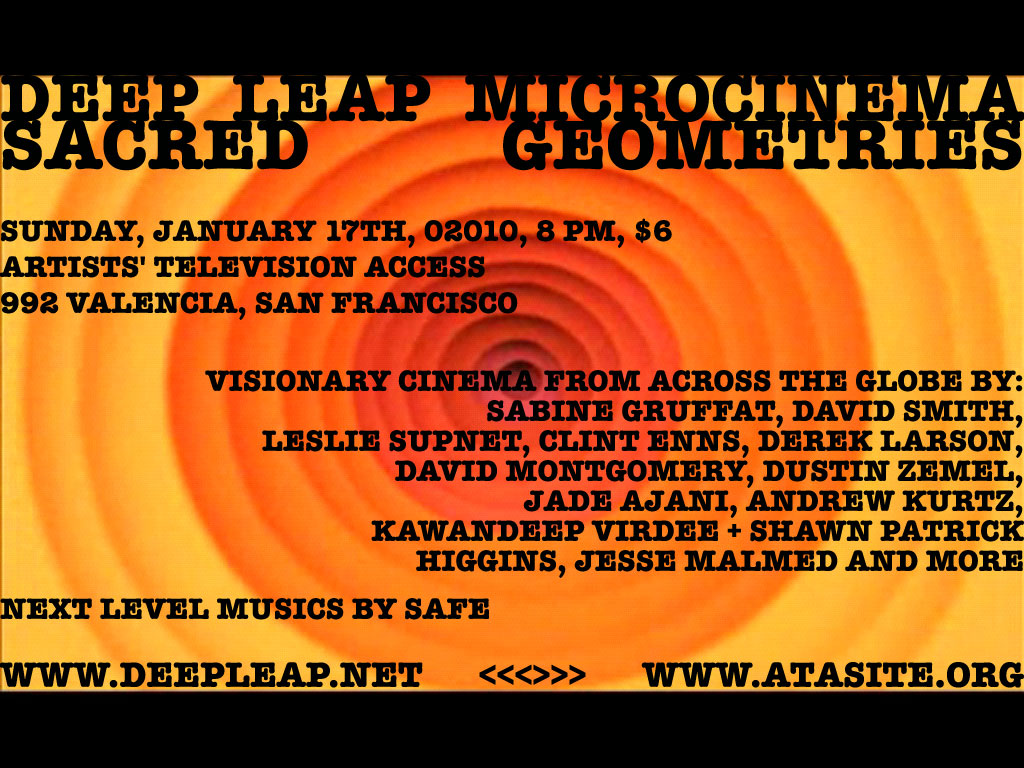 In Portland:
Duncan Malashock - Let's Make Sure Everything Is A Thing .com (interactive flash on laptop)
Carson McWhirter - Performance
Lena + Jin - What It’s Like To Be You Sitting Here Watching Us (performance)

In San Francisco:
a performance by SAFE (Chris Edley)

Program Notes:
Sacred Geometry is, in its essence, the recognition of the geometric/mathematical order and patterns through which the material world is ordered and constructed. Math is nature, patterns produce order and a sense of the sacred is imbued in everything.

This most seductive of notions--that our insides and the insides of all natural, material things are composed of the same simple shapes, the same enrapturing patterns--is as old as recorded history as is its use by artists as a mode of expressing interconnectivity and divinity. This program attempts to parse the ways in which these ideas are carried forth into the digital age; how contemporary makers and thinkers treat aesthetic/spiritual philosophies of such global, historical and simple contexts.

Interview with a Sacred Geometrist offers a marvelously clear and concise vision of this philosophy’s persuasiveness and pervasiveness. Then there are those like David Montgomery, whose contagious, holistic animations of the raw, natural empirical truths behind these ideas are wholly holy and unencumbered by critique or judgment. Others present a more complicated relationship with these symbolic relationships. David Smith creates rotoreliefs like an net-head Duchamp, conflating and flattening color codes, sacred symbols and scientific visual grammar through simple swirling. Derek Larson’s anarchic piece serves as a glib re-investment in the idea of balance as a Fact of Life. Similarly, Brel Froebe’s piece reveals hidden atomic truths to ancient shapes (and shapes the linguistic boundaries of religion and mythology), while Leslie Supnet’s invocation of Kenneth Angry symbologies reconnects freak magick, animas and climactic progressions, my own video reveals a difficult tension between religous/cultural/media icons in the age of telepresence and legitimate spiritual experience.

As is typical of the medium, the nature of technology and the precepts of both analog and digital aesthetics loom large in this program. In particular, there is a fascinating thread in the history of media art of artists teasing out the sacred, the “natural” and the inherent in their media. Jade Ajani’s infinitely heady forays into the very depths of video feedback revel in the patterns and shapes innate to the video-cinematic apparatus; Sabine Gruffat’s videoscapes represent a fascination with the generative properties of video and a fascination with harnessing and unveiling new levels of vastness; Clint Enns’ use of discarded and broken camera technologies also speaks to an interest in the imperfect possibilities of video--what an artist can wrest from technological arbiters of quality and representation. Andrew de Freitas’ imaginative and whimsical sketch of The Nature of The Universe and Jen Stark’s mesmerizing low-tech animation are rich with both visual pleasure and power.

////
Jen Stark (www.jenstark.com) was educated at MICA, lives in Miami and makes gorgeous, colorful animations, sculptures and drawings on and with paper.

Clint is currently a Master’s student in Mathematics at the University of Manitoba, and his interests include model theory of rings and modules, structuralist film, destructuralist video, and mathematics in art.

Brel Froebe’s Mosaic 1 takes its shape from the Egyptian god Ba’al and its shimmer from Anton Lavey. Brel is a New York-based artist and curator. He has presented work at a variety of venues, including Light Industry, Artists’ Television Access, Northwest Film Forum, DIM Cinema, and Showcave Gallery. Brel also co-founded Chemtrailz, a Brooklyn based performance and curatorial group that makes work playing off the aesthetics of conspiracy theories and structural anthropology. Look out for a West Coast tour Summer 2010.

Leslie Supnet is a visual artist and animator from Winnipeg. Her work deals with visually reproducing everyday experience, aiming to give an outlet to our trials and struggles. More of her work can be seen at www.sundaestories.com. sun moon stars rain is a psychedelic visual elegy, lamenting the death of Mother Nature’s children.

Derek Larson, who earned his MFA from Yale and has shown his sculpture and video throughout the country, received the following comment on ratemyprofessor.com: This was a very hard course and I only got a B even thought I worked hard. But this prof was really interesting and I learned a lot. He is really one of the nicest people I have met at college. www.dereklarson.net. His Tootie Yin-Yang is the intervention of passivity in entertainment.

Dustin Zemel’s 1 +1 > 2 was built using an analog compositing apperatus at the Experimental Television Center in Owego, NY. The video bridges time and space through the simultaneous presentation of present and past, composited in realtime on a video mixer and previously by a friend many years ago on the manipulated video tape. Primarily concerned with the blurred intersect between narrative and documentary, Dustin Zemel has been studying film at the academic level
for ten years, and building videos for just as long. He recently received an MFA in Science and Natural History Filmmaking, which entailed extensive theoretical exploration on the ontology of documentary film. As part of his thesis, he built a documentary that implemented his theories of non-redundant image placement. Dustin currently teaches the Experimental Techniques class at NW Documentary in Portland, OR.

Andrew de Freitas (http://www.andrewdefreitas.com), originally from Auckland, NZ and currently living, making and studying in Montréal, produced the following text to accompany his Music Video for Lucretius:
-- I asked you whether you’d ever really looked at the land and the sky and felt totally a part of nature, but instead of answering you brought me photographs. They were images of landscapes - strange images of nature without people in them. The spaces were vast and totally ambiguous, but there was still something in them that I recognized.

-- I asked you where they were taken and you replied that they hadn’t been taken yet. You told me that we have a different kind of memory for things that we can never bring to mind. You told me that immemories move through the other memories in our minds and leave an impression on them. Even though we have no real experience of them we are sometimes able to recognize the traces they leave when we recollect or project something in imagination. They are beyond memory and yet somehow they infiltrate it.

-- When you had finished talking I was asleep and then it was total darkness - but I knew I was in those landscapes. I told myself that there should be no terror when the mind is in darkness because it has it’s own light - the same light by which we are able to see in dreams. I wondered what would happen if there had never been any light - what the images would be that we project into dreams. I recalled the photographs you’d shown me and it brought me comfort - I felt in the midst of familiar forms even though I couldn’t see them.

-- When I woke you were no longer there and I wondered if you ever had been. The question of an imagined presence made me feel like a child. Back then I was only really able to understand mathematics when it was illustrated using forms and metaphors. I never had imaginary friends, but I had to fabricate sets of imagery in order to make sense of the equations - other people need only symbols and formulas.

-- Lucretius, the Roman philosopher, made deductions using poetry. He observed the abundance of improvements to things that he had witnessed in his short lifetime - the sails of ships, weapons and musical instruments. If the universe is eternal, he thought, and the world has always existed, then there should have been plenty of time to make the same improvements a million times over - we should be living in a ‘finished’ world, but we are not. Therefore - he deduced - the world has not always existed.

David Montgomery’s Aesthetic Species Maps is a time-based detail of the range of shapes and patterns within several species of flora and fauna; genetic diversity visualized by forms which simultaneously reflect balance, symmetry, and an infinite potential for variation. The sound is by Otters Making Music. David lives in Florida and at www.silverfishcloset.com.

David Smith’s What Goes Around? is a psychedelic index. A series of orderly color wheels are set into motion, rotating, expanding, contracting and overlapping. The resulting imagery, paired with a progressively cacophonous soundtrack suggests a place between order and chaos, expansion and contraction, safety and fear. David earned his MFA from Bard’s International Center for Photography and lives in New York. www.thedavidsmith.com

Sabine Gruffat, a media artist living and working in Madison, WI, has shown her work all over the world. In addition to her bicycle-film tours across France and Switzerland with Bill Brown, she has toured the US with Mary Billyou and collaborated with Ben Russell. She is at work on a feature about Detroit and Dubai. In MOUNTAIN—made at the Experimental Television Center—abstract shapes and signals overlay and intersect each other. Some shapes move as if manipulated by hand, while others seem to morph smoothly as if computer- animated. At times, the sound is visible as pure signal while at others it seems to have a color. In all these works, images and sounds interact with each other in real time. For example, image data is read as sound then immediately transformed into image by a computer or an electronic signal becomes a string of numbers controlling the shape of an animation.

In these works, production processes are fore-grounded and the subject of the work is the manner by which digital and analog technology can be directly and indirectly controlled by human touch to create an artificial image of the world.

Duncan Malashock is a new media artist in Austin, TX. Born 1982, San Diego, CA. Bachelor of Arts, Bard College 2005. He is a member of rhizome.org, computersclub.org and the community-run MASS Gallery in Austin. Of his untitled interactive flash piece he writes: Thin, clear domes form the boundaries of an iconic starscape, silently inviting the user to manipulate a containing and categorizing structure onto an endless cosmic flow.

A common yellowjacket, Vespula pensylvanica, inspects the beginnings of her paper nest, closely examining each hexagonal cell. Her findings are astounding: a diverse array of outlandish biologies incubate in each one of the identical cells! She will care for them as if they were her own. The visual fields, taken from the vast archives of optical feedback experiments meticulously generated by Jonah Adels and Jade over a period of some months, summon the inquisitive and searching nature typical of a psychedelic journey. The immersive sound design is the work of Jeffrey Brodsky. Jade says: The “rummaging-through-the-maze-of-my-mind” vibe of Are You In It? was largely inspired by the following exchange: Jonah passes me the pipe, smoke trickling from his nose. I take an acrid toke of the tightly-packed bowl of Salvia divinorum. I exhale. Oh dear! I turn to Jonah to check in. His undulating face of crystalline flesh turns towards me with a piercing stare and words clearly on the tip of his tongue. In a voice far deeper than a basso profondo, Jonah asks of me, “ARE YOU IN IT?”

Jade Ajani is a documentary and non-fiction filmmaker currently based in Portland, OR. He is in the process of following up his much lauded feature documentary Growing Awareness with Janadhaar, an exploration of indigenous struggles for traditional land rights and the establishment of community-owned ecotourism in the Nanda Devi Biosphere Reserve in India’s Garhwal Himalaya. Jeff performs under the monicker Jeffrey Jerusalem and in bands like Inside Voices and Terraform.

LENA + JIN is a performance duo based in Portland and New York and and and this dance never stops and you and you are more than just a number. Their gmail addresses are available upon request.

Carson McWhirter, intergalactic shredder and ecstatic imagineer, has been of projects like Hella, the Advantage and his own wonderful EVERYBODY.