DEEP LEAP MICROCINEMA — THE INTERNET IS A TERRIBLE PLACE TO LIVE 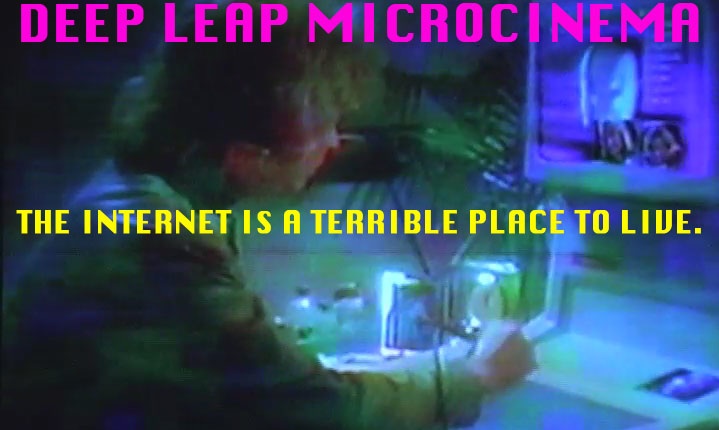 Years ago we sang a song:
“friendster, facebook + myspace
get off the net + over to my place
gotta get over your email attachment
‘cause your heart’s hard-drive is crashing”

Briefly: this program represents a wide range of artists and practices that operate within the same sphere as a phrase like “the internet is a terrible place to live.” It is meant to be evocative—slightly snide towards those cyber-utopians who think tweeting is a somehow radical act, discomforted by our increasingly net-mediated notions of self and relationships, in love with the creative possibilities of such technologies and maybe a little just the right type of joke to right type of guy.

Nia’s work takes the contemporary global folk art of user-created, webcam youtube videos and exposes their banality, universality and incisive vision into some collective psyche. Tyrone’s piece is an actual, real life internet meme that has something like a trillion views and even earned him a chance to relive his infamy on the Comedy Central show tosh.0. Tyrone is, incidentally, a video and performance artist skilled at crafting disjunctive and re(-)mediated experiences. I honestly do not know his level of complicity in the origination of this work.

Max functions somewhere between youtube clown and “credible” performance/video artist. His works are described both as “brilliant” and “a complete waste of time” by youtube users. Jeremy’s and Nathaniel’s works have an interesting relationship and connection in their concepts of the body and the computer. In this piece, Jeremy brings his body into the computer and (diegetically) allows it to take over (I think in reality he might have been the one who was really in control) while Nathaniel brutally tries to force and literalize his body into his computer.

Stephen’s lovely little loop reveals the emotional resonance of a program like Google Earth through its fleeting, zero-gravity tour of a certain kind of spatial, exterior memory. Tabor, the youngest in this program, makes work that has the excitement and novelty of our finest young digital artists, those for whom the internet does not seem to represent a daunting new paradigm, but rather an integral part of an artist’s life. Perhaps this is buying into the Digital Native narrative too heavily or envisaging generational divides where they barely exist. Either way, the bliss-mash of Tyra’s 13 Next Top Model freaks and the X-Men’s 9 mutant freaks is awesome. The effortlessness with which we move through space in Grey’s piece is astounding. He puts it best: this reveals how “automatons facilitate interactive fantasy realms in direct response to our unspoken emotional projections.”

Rachael’s animation is a clever melding of analogue and digital techniques that functions as a nightmarish (but utterly relatable) narration of a structuralist spiral. Hooliganship’s work is filled with so much energy and color and texture that their formal and aesthetic innovation are sometimes belied. Moving image collage (of technique, material and motion) for our century.

Tyrone is originally from SLC, earned his MFA from SFAI either seconds ago or seconds from now and in addition to his stellar media art and installation is the mind/body behind the Free Form Film Festival, Lost Media Archive and LOAF-I.

Grey is from Chicago, went to Bard, lives in Brooklyn and has worked with artists like Lucky Dragons, John Zorn, Martha Colburn and Jolie Holland on a variety of music, performance and film contexts.

Stephen teaches at PNCA and has shown at just about every reputable Portland art institution, including, most recently, the Portland2010 Biennial.

Jeremy is a video, software and performance artist living and working happily in Toronto with his Syracuse MFA, Images Festival works and a quote from Filmmaker Magazine, “a one man revolution.”

Nathaniel Katz earned his BFA from SVA and his MFA at RISD; currently MIA from the USA (he’s in the ITL), his works are set to be shown at Fondazione March (Padova, Italy), LOOP Festival (Barcelona) and the Moscow Biennial for Young Art this year.

Rachael is from Cleveland, went to Bard and in addition to making art organizes the Brooklyn Pizza Party video screenings, co-edits f.ART magazine and is set to open “Lost and Found: The Work of Ben Porter” at MOMA’s library.

Max lives in Austin, shows widely/wildly and has a fantastic DVD of his work available through excellent Texas imprint Monofonus Press.

Hooliganship (a.k.a. Peter Burr and Christopher Doulgeris) is a Portland video band/instituiton on near constant tour throughout Europe and North America.

Tabor Robak is a Portland native and recent graduate of PNCA.

Nia Burks, who attended the show, lives and works in Richmond, VA and is interested in collecting and organizing objects and ideas. She has a BFA and two Masters degrees in art and a host of upcoming shows in New York and Europe.

The incredible Weird Faction (Metaphortean Researcher and Irving Bleak) make up half of the media performance group Weird Fiction.

Microscope Gallery is a nascent experimental media gallery and space in Bushwick founded by Elle Burchill and Andrea Monti.

University of Oregon is a public, co-educational research university founded in 1876.